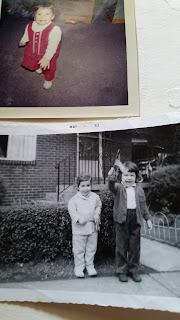 An old steel town has its stories. Has its characters and secrets too. . .


Growing up in a small town was magical at times. When we children rode our bikes around the neighborhood, we imagined all sorts of mysteries behind closed doors. There were neighbors to fear, cranky old spinsters who knew everyone’s business; Moody fathers of friends that you had to tiptoe around. There was the special needs man who spoke of nothing but tragedies that we children would hide from. There were also sweet people like my next door neighbors who had a creaky porch swing that they would allow me to sit on and swing every so often. And sometimes as the husband watered his flowers with a hose, he would squirt us children as we walked past and look away, feigning innocence as we giggled uncontrollably.
There were little outdoor parties that my friend Patty and I would gather small feasts of junk food: mini donuts, crackers, cookies, and cakes. Sometimes we would hang a huge blanket over the railing of her back porch and eat in the cozy tent we’d created.
We pretended our bikes were cars as we rode along the sidewalks. We would stop at the red lights and go on green. We played countless hide-and-seek games, board games, and swam in little inflatable pools in the summer. We tried to make outdoor carnivals, and pretended to sail away in grape crates to what my grandparents affectionately called The Old Country.
Nothing was more exciting than Nonna’s attic. Old houses back in the day were famous for these extra rooms. There were cardboard boxes stuffed with yellowing newspapers which held layers of voluminous bridesmaid dresses and pretty clothes. There were steamer trunks with their slightly musty scent piled with assorted goodies—doilies, sewing boxes, hand-crocheted items and knick knacks.
An attic that was big enough to have two double beds and assorted antique furniture was better than any clubhouse for me and my cousin. There was a small, mysterious room in one corner that had a small fire once and it still held the scent of old smoke. Yellowing, cracked linoleum lined the floor. Yet to me, it was as beautiful as a mansion.
Nonna had a tin button container that my cousin Anna and I adored. There were lovely rhinestone buttons, plastic buttons that looked like flowers, metal ones and opaque colored ones. It was a favorite playtime of ours, to choose our favorites and pretend they were “people.” Nonna’s button was always the biggest one with a large sparkling stone in the center. Our mom’s buttons were more conservative—plain, white ones. Mine was light blue with a floral print and a tiny stone in the center. Buttons were just small enough to fit anywhere—to have incredible adventures, and always have a story that ended happily ever after.
Many people at that time had borders that stayed with them—people who paid a small amount of rent for a room. Nonna had Phil. He worked in a local steel mill, and became like a member of the family. He was a true gentleman, kind and very funny.
My grandmother made regular Sunday dinners with homemade spaghetti, the softest, tastiest meatballs, tender veal cutlets, Italian bread and salad. These dinners were wonderful times and nothing could break the bond of the feeling of family surrounding that table.
Phil would make me and my cousin giggle during dinner. He also would get us to finish our whole plate of food by saying that whoever was the last one eating, was the “monkey.” Nobody wanted this title, so I blame Phil for my weight gain and love of food later in life. Then Anna and I would help Nonna clear the table and squabble over who got to wash the dishes, and who had to dry them. Anna was older than me by several months, so somehow she always seemed to win the best of our fights.
Sometimes Nonna and Nono had friends over for card-playing nights. Wine flowed freely, and chatter was mostly in Italian. I sometimes sat watching them play and they tried teaching me the rules to a game of Scopa, an Italian card game. My eyes became heavy as they played late into the night, and Nonna would walk me up to her room and tuck me into her bed. She closed the door, and as I drifted to sleep, I could still hear their hearty laughter and talk.
Childhood was my own Narnia world. Though there were realistically bad events, nothing could steal my imagination. Pretending became balm to me; an escapism that I sometimes wish I could still find. If I was really someone else, nothing could harm me, right?
Is it any wonder that every so often, I visit the childhood of my youth? Sometimes I drive along the streets where I used to play. And other times I travel only in my memory. For there it is safe, there it is only a shadow, one that I can embrace if I care to, or leave behind for a little while.
Take a moment to remember your journey of pretending. Stay a while, but not too long. It's a special place.