It is always fun to reconnect with someone you went to school with.  Recently I have had the privilege and pleasure of finding a good friend from my high school days, J. Michael Krivyanski.  Nobody could make me laugh like Mike did, back in my eleventh grade year.  He was a witty, fun, creative person.  It is no wonder then, my friend is a writer!  Hope you enjoy these interesting facts about a dear, old friend......Just don't tell him I said he was old!  Take some time and check out his books and blogs! 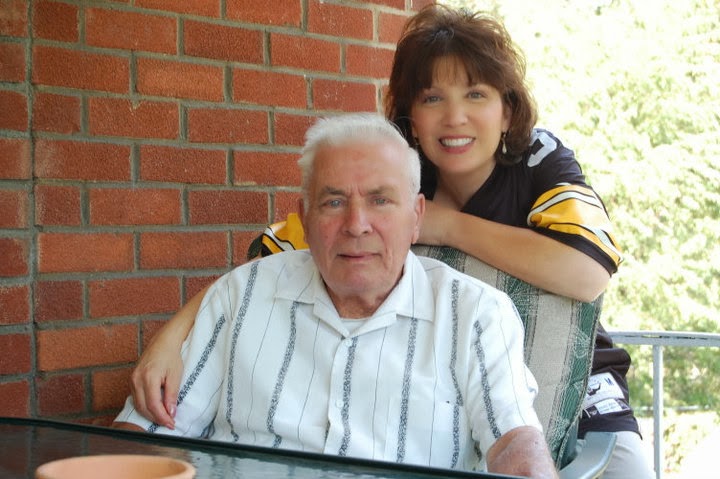 This is a little six sentence short story which I recently entered into some contests.  I didn't win, but it is a sweet little story you may enjoy reading.  There certainly is a challenge when one is confronted with the task of keeping a story to a minimum of words.  Lots of fun, not so easy, but definitely worth it!

On a gnarled, oak bench, underneath a fragrant pine, sits my father, worn, leather prayer book open on his lap.  Jewel-colored hummingbirds dart to and fro suckling sweet nectar, when one flies near to whisper in my father’s ear.  Sunlight filters through the branches on this lazy morning.  He stands, stretching out the body, now bent from age, as his face turns upward letting the first rays of warmth course through him.  “Thank you, Father,” he says.  It will be a good day.
Posted by Karen L. Malena at 3:07 AM No comments:

A move to the big city

With that deer-in-the-headlights look, I began my first day at a new job over five years ago.  Twenty seven years at another job, and there I was starting over again.
My husband  Jim and I had met at an online dating site.  After a few failed attempts at other relationships, my brother opened up my world to this type of dating.  Scary at first, it grew to be quite fun.  There were a few others I met in the cyber world, but Jim was the special one.  The one that could make me laugh.
I had left everything behind, brother, parents and old friends to pursue my new life with this man.  We hadn't dated too long before deciding to marry.  I found myself moving to a larger city, and a strange, fast-paced lifestyle that was foreign to me.
Oddly enough, I had practically grown up in a dental office, as I had begun my career as  a dental assistant when I was only eighteen years old.  There I was, forty six, and trembling at the thought of learning dreaded computer skills.
The former dental office had been quaint, old-fashioned with a rickety, old typewriter that had been my daily companion.  Before me was a keyboard that didn't look anything like my dear old friend.
Patiently, my new boss, dear Kathy sat by my side, encouraging me every step of the way.  She may never know the stomach pains which had gripped me in those first hours and days.
Soon enough, I realized the bulky monstrosity was so much more than the old, Royal typewriter I had left behind.  It could do things I had only dreamed of.
Maybe this new, fast-paced lifestyle was something that could be embraced.  Something to look forward to.
The stomach pains faded as the days flew by.  Here it is, almost six years later.  The big city has brought so much more into my world.  Love, new friendships, a church family closer than anything I could have dreamed of.   And not only has the office computer become my friend, but my boss Kathy has too.
Posted by Karen L. Malena at 4:14 PM No comments: