He's the spirit of Christmas

If I had a sentence to sum up my brother, Rick, it would be:  He truly is the spirit of Christmas.  This is a young man who takes time throughout the year listening to what people say about their likes, hopes, wants, desires.  He isn't the type to run into any old store last minute, trying to find a quick gift.  No, he begins a steady quest on the web, at estate sales, many different venues which none of us would think of.
He hears stories we all tell of special gifts we had as children, but had lost through the years.  The kind of gifts we held so dear to our hearts during the ups and downs of childhood.
One year recently,  I was delighted to open a present containing my favorite doll from my youth, Beautiful Chrissie.  She had hair that grew long by the touch of a button, or you could wind her hair back into her head to create a shorter style.  This must sound strange to the young people of today of course, but she had the prettiest, happiest face, and Chrissie had gone everywhere with me once upon a time.  My own dear doll had been gone for many years, but there, in front of me, was that pretty face smiling up at me once again.
Another time, I squealed with delight to find a favorite game of mine long gone, Voice of the Mummy.  It was an awesome game which had an Egyptian mummy as the main character which spoke cryptic phrases as you climbed the pyramid with your playing pieces.  I remembered hours upon hours with this beloved game, and here it was again!
I once opened a gift containing that great, young adult game Mystery Date which first gave me the peek into the world of dating.  The pretty girls and handsome young men on the playing board were something I longed to be a part of.  My little girl's mind had many hopes and dreams to become as charming as they were.   My dear brother found this one at a yard sale, of all places.  I sit back and wonder, how does he do it?  How does he have the luck to find just the perfect gift, especially these collectibles which meant so much to me in my past?
This year had to be the best though.  We have asked our parents to tell us about special gifts they had as children.  Our mother mentioned a dolly some person got for her one year, since her own parents never had the money to spend on three children.  Our dad said he never got toys either, usually some fruit and nuts in a stocking.  Yet there had been one year, when he was about ten, where his older brother had given him something which stood out.  Something he would remember all his life.
Dad was a huge Lone Rangers fan.  He would listen to the program on the radio back in the era before television, hearing the amazing adventures of the masked man and his trusty steed.  To a young boy, back in the forties, this was one of the most exciting shows ever.  Dad's brother was several years older than him, and growing up, they weren't extremely close.   But one Christmas, Dad opened a gift which he treasured above all others.  It was a Lone Rangers watch.  The picture of the famous hero upon his horse, Silver as the face of the watch.  His older brother must have known how much he loved that program.  This was something Dad could really treasure.  As he grew older, he lost the beloved watch, as we all do when our attentions turn to more grown up things.
Yesterday, on Christmas morning, we had finished opening our heaping abundance of treasures with everyone feeling content.  My brother reached behind the Christmas tree for a small, rectangular package.  This is also something he does.  Just when you think you have finished opening his piles of kindness, there is always just one more.  This year, Dad was the recipient.
My son was ready with the camera.  Apparently he was in on it too.  Dad pulled the colorful wrapping from the small gift, opening the box inside carefully.  The look on his face at eighty one years old was priceless.  I choke back tears thinking about it even now.  There, inside the box,  was a Lone Rangers watch.  Not a replica, mind you, but an actual 1940's version.  My brother had done it again.  Dad couldn't believe his eyes.  Years melted away as the little boy inside him came to life once again with the most precious Christmas gift he had ever gotten.
Thank you, Rick, from all our hearts.  You are truly the spirit of Christmas. 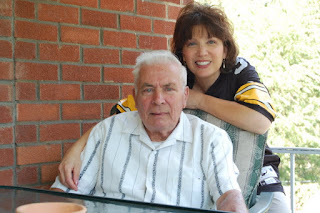 It was February, 1971.  Snow had fallen the night before.  Dad was outside shoveling as I watched cartoons on a Sunday morning.  A huge noise from the room  above me, startled me.  My dog, Buffy, ran to the stairs, as I almost walked up to see what had happened.  I heard the strangest sound, a snoring, or gurgling from above.  My mother was upstairs, and it sounded scary.  I ran outside to tell my father.
He came into the house to check on my mother, and called down to me from upstairs to phone my grandmother for an ambulance.  My eleven year old mind couldn't process what he was telling me, but I knew it was very serious.  I called my Nonna, who must have quickly dialed the ambulance service.
A few moments later,  the ambulance crew arrived, quickly going up the stairs to see what had happened.  My mother had fallen, having a cardiac arrest, something we didn't know at the time.
As they carried her out on a stretcher, she was conscious and spoke to me.  She told me not to worry, and to have fun.  My little mind couldn't process any of this.
Years later, I heard details of her strange  hospital experience .  It seemed as they stabilized her for the night, my father was leaving the hospital to come home to me.  As he was walking down the hallway, he heard the code blue called over the loudspeakers.  He just knew it was for my mother.
My mother had another cardiac arrest, this time much more serious.  She had to be revived, something I never knew at the time.
The doctors and nurses were able to revive her after a few minutes.  When my father was able to see her again, she said something odd to him.  "Rich, I'm not afraid to die."  Then she told him her story.
She felt herself being drawn down a long, dark tunnel.  The further and faster she went, she began to feel a profound peace settling about her.  She felt as if she was the only thing, only person that mattered in the world, and love was wrapping Itself about her.   She went no further, but was quickly drawn back to consciousness  and heard a loud "popping" sound as she came to.
As I became an adult myself, I read many encounters of near death experiences.  They sounded very similar to what my mother had described.  She wasn't "out" as long as some of them, but long enough to have the experience she told us about.
Mom has often shared this tale with people she meets, especially when they are grieving, or forlorn about a loved one who has passed.  Many times, she moves people to tears, and has often inspired others with her story.  I believe in what she says.
So, as St. Augustine said:  "God loves every one of us, as if there's only one of us."   I believe my mom had a glimpse of this. 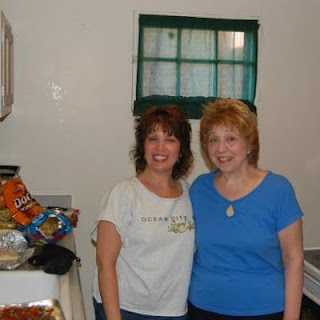