I Miss You Cousin 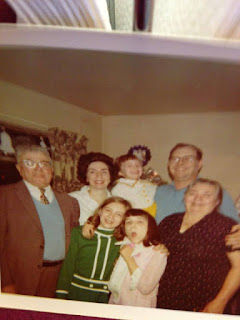 How is it that we lose touch with some of the people who most impacted our lives in profound ways when we were children? Do we "grow up?" Move away? Have lives so different we no longer recognize the little girl we once were? Can we dare try to find that innocence once again?

She was intelligent even at a very young age. Pretty, clever, funny, and imaginative. She was world-traveled and an army brat. She could be bossy, demanding, and opinionated. She was my cousin Anna, and there was nobody I adored more when I was a child.

When you are the daughter of mental illness, life throws harsh reality your way. You need to find ways to cope; to deal with the anxiety that has overtaken life. Every day is an adventure. Sometimes a most fearful one. But when you are fortunate to have imagination, and someone to share the journey, the road can be smoother, even easier. My cousin was that someone.

Anna and I could find adventure in the simplest places. Our Italian Nonna had a button box. You know the type. Little round tin with assorted bits of brick-a-brack, buttons of all shapes and sizes, old zippers, and sewing implements. We turned those buttons into pint-sized people. They were our family and had trials that were easily overcome. Our Nonna was the "Queen" button; the biggest, prettiest one with a faux diamond in the center. She ruled over our little world much like she did in our real lives. For Nonna was a constant. A soothing presence in the storms surrounding us.

We cut out super hero pictures from comic books and had daring rescues as Wonder Woman and Super Man escaped the evil clutches of whatever rogue assailed them.

We took old grape crates that our grandfather received his stock of fruit- of -the -vine for wine making. We jumped into them and imagined that we were visiting "The Old Country," the place that our grandparents spoke of often as if it was magical.

We pretended to be other people in other places, always with an outcome where good triumphed over evil.

As we grew into teenagers, we spoke of love and boys. And we were in love with every one of them. We made silly, clever questionnaires with all sorts of scenarios, and dared one another to answer truthfully. And we talked late on sleepover nights, sharing our future plans, hopes, and dreams.

How is it that we haven't spoken in years?

I miss Anna. I remember missing her like this when she and her family would move away for the Army. I would pine for her and write letters awaiting the day she would return once again. And she always did. Though as we grew older, it would take a little time to feel comfortable with each other. But once we did, we began to reminisce about the childhood we shared, and started laughing hysterically over long-forgotten memories.

I hope life has been exceptionally good to my cousin. I pray she has been blessed. I may even gather the courage to locate her in the upcoming weeks. She couldn't have gone far. After all, a bond from such wonderful days long past, can never be broken.