Bushel and a Peck: Hope, Healing, and Unconditional Love 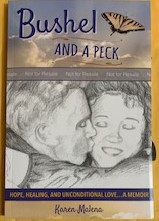 My mother told me that she’d had a secret name for me. She called me her ‘Shining Star.’ Like a blazing trail of light, I was always the one thing Mom could come back to. When she knew nothing else, she still knew me. She said I’d been like a beacon of hope to guide her home. It was a title that rooted my love deeply for my mom. I could see the patterns of her life now. It became clear that she’d never been weak. My mother had only wanted to be loved . . .

Mom’s mental illness stigma made my early life anything but ordinary. But my father’s quiet courage helped to guide us through. Later, from strong businesswoman to Alzheimer’s, my mother would leave a legacy of lasting love, and Dad, one of incredible strength.

It took me four years to write this novel, but a lifetime to live it. Though sometimes I look back now and feel there was never enough time with Mom and Dad, I know that my parent's lives and their love carry on in me, my brother, and son.

This memoir is deeply personal to share, and it isn't just another journey of Alzheimer's though there are many wonderful books on the subject from my fellow authors. This is a story of how one man loved one woman unconditionally enough to go through hell and back, and how a family's faith allowed them to glimpse times of miracles. It is my own story of insecurity, fear, anxiety, and tears. It is God's love poured into me so much that I pray it overflows into you as you read it.

Thank you for allowing me this little bit of self-promotion as I share my book with you. If you are blessed by it, I would truly love to hear from you. My email is scoutfinch15003@yahoo.com 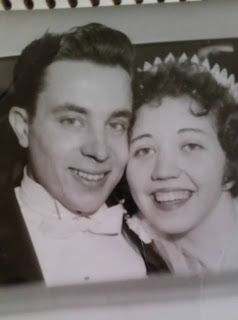 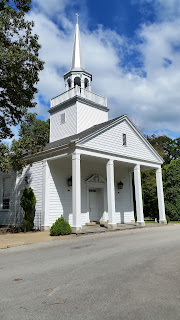 The phone rang at the small dental office where I worked. “We need you to come in for an x-ray. There appears to be a spot on your lungs.”

I clicked off the portable phone with shaking hands. The dentist looked at me across the patient we’d been working on. As the only employee- dental assistant and receptionist- my duties were numerous. I knew that my boss didn’t like me to get personal calls. But I think he could tell by the look on my face that it was something very serious.

Fear grabbed hold of me. I had no words. I had to finish the patient’s procedure while my stomach cramped and clenched with terror. I tried not to let my hands shake as we continued working.

I imagined the worst right away. I’d always been a glass-half-empty sort-of person. News always meant something bad. But this—a spot on my lung. It had to be cancer.

So many thoughts assaulted me at once. I’m only thirty-eight. My son is ten. I can’t leave him now. He needs me. What about my parents? We were such a close family. What would this do to them?

After we dismissed the patient, I told my boss about the phone call. I excused myself from the office for the rest of the day. I had to find answers.

I drove three blocks to my physician’s office. I barely noticed the brilliant hues of the red and gold fall leaves on the trees lining the streets. People walking along the sidewalks blurred as tears stung my eyes. Though Thanksgiving would soon be approaching, I had nothing to be thankful about.

I’d recently had minor outpatient surgery. Everything had gone well and I’d been on my way to complete recovery. It seemed odd that the doctor called me now after I’d had all the pre-testing and x-rays done over a month before. Nobody had informed me of any issues and I’d been cleared for the procedure.

When I walked into the doctor’s office and informed the receptionist I was there, she told me to wait a few minutes and they would call me back shortly. I tried picking up a magazine to browse through or tried smiling at the others seated nearby. Nothing worked. I could feel fear choking me.

New x-rays were taken and I waited for the doctor in an examination room. It didn’t take long for him to bring in the new films.

“Here it is,” he pointed out. “A spot on your left lung.” He compared it to the x-rays taken one month before.

The words hung in the air until I had the courage to ask, “What can it be, doctor?”

“Well,” he said, “it could be an old scar from pneumonia you may have had at one time, or it could be cancer.”

Cancer: a word that changes lives. It would certainly change mine.

I left his office that afternoon completely baffled and fearful. Further tests would have to be scheduled.

I called my mother that night. “First of all, I refuse to believe this,” she said. “Also your doctor was too harsh. I want you to have a second opinion, honey. I’d like you to see my doctor. She’s good and also very compassionate.”

Mom also told me about a pastor she had recently met in the little antique shop she owned. “He was a good man,” my mother said. “We got to talking about so many things the day he was in the store. He told me incredible stories of healing. He said he had been given the gift of healing hands. I’d like to call him for you if that’s okay.”

Though I’d been a bit skeptical as I waited for further tests, I knocked on the door of the pastor’s small home. He invited me in, and we sat and chatted for a while. Pictures of Jesus hung on the wood-paneled walls: Jesus comforting little children and the sick. Jesus, please comfort me too, I thought. Bibles and inspirational reference books lined bookshelves. A sense of peace enveloped me.

I wanted to clear my conscience before he prayed. There were issues that recently bothered me and had given me great guilt. As I spoke, I felt cleansed and a sense of great relief.

He anointed my forehead with spice- scented oil that reminded me of the incense our church used during special seasons. He placed his hands on my head as he prayed. I could feel the depth and power of the healing words as he spoke. There seemed to be a warm sensation going from his hands right through me. When he was done, I thanked him. He asked me to stay in touch.

During the time I had to wait for the scheduled tests, I kept busy with something I enjoyed: raking fall leaves into huge piles on a crisp afternoon. My mind felt free in the fresh air. I’d been reading my Bible daily like a warrior getting ready for battle. I prayed bolder prayers and began to think a bit more positive. The fear that had engulfed me was replaced by a sense of calmness. The touch of the pastor’s hands had given me hope.

My mother’s doctor met us at the local hospital the day of my tests. She was a tiny lady with a big personality. “I’m going to be around,” she said to me and Mom. “I want to see the results of the scan immediately.”

Afterward, when we sat in the waiting area, my mother’s doctor came into the room with a perplexed, but cheerful expression. “I don’t know what the other doctor saw,” she said. “There is absolutely nothing on your scans.”

Relief flooded me. Mom and I thanked her for the wonderful news as we hugged one another and cried happy tears.

Later that night as I was praying, I remembered something that a friend had said to me a few months earlier. She’d called me one day and said, “Karen, I don’t know why you are supposed to hear these particular words, but God said everything is going to be okay.”

They had been cryptic, but comforting words at the time, and as I thanked my heavenly father that evening, it came to me: I’d already been healed from that moment.

It was easier to think positively as time went on because I’d become a more powerful prayer warrior. When others had issues in their lives, I gave them Bible passages that had comforted me during my own fearful time. I shared my story to bless others. Scriptures were no longer words but living truth. No longer fearful and negative, my life was filled with true thanksgiving.  It was the best Thanksgiving ever.