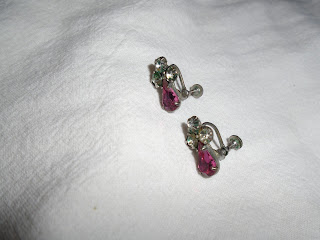 Last summer, after my mother passed away, I had been in a deep sadness, unable to find a reason to smile or laugh. Nothing made me happy, and the weight of loss lay deeply on my soul.

I saw in my email a note from Guidepost magazine. I'd sent them several of my writings before, but had totally forgotten about it from all that had gone on with my mother's failing health. When I opened the email, I saw that they accepted one of my stories! Joy flooded back in. A reason to smile, and even to sing once again! Someone had recognized something good in my writing. And of course, it was an article I'd written about my mom. The timing couldn't have been better.

I want to share that article on my blog today since everyone may not be subscribed to "Mysterious Ways," Guidepost's sister magazine. It is not as I originally wrote it, as their editors had an idea to focus on the earrings. I had to make a few changes to my first draft. Looking back now, I see exactly what they intended. May you be blessed by the little story you are about to read: 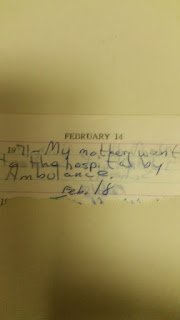 This is my actual diary entry that I'd found.

I Am Not What Fear Says 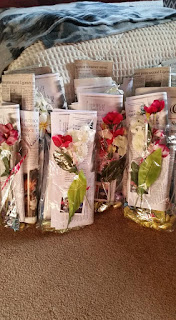 What went wrong today? It was a lovely, warm, sunny day. All my preparations had been done for the upcoming author event. Little gift bags were colorfully put together; a big basket and afghan also completed for a giveaway. People were kind and by all rights, nothing should have been negative.

Why then did I falter so terribly? My palms sweated, my hands and voice shook. My throat dried up and felt as if it was closing on me. Darn body! I couldn't trust myself to give a good talk. All the other authors did excellent in my opinion. We had been kind and courteous to one another, listening as our fellow authors spoke. But when it came for my own turn at speaking, I completely dropped the ball today.

Life is like that sometimes. No matter the preparation. No matter how confident we feel, how good we put ourselves together, something can sneak in and loosen the best laid plans. The enemy wants nothing more than to rob us of our joy, or hit us at our most vulnerable. For me, it has always been about insecurity. I have often felt I will never measure up to others. They do everything better than me.

It had been a rough work week. Our boss has been on the warpath with several office changes. I had felt stressed to the point of not sleeping well. I had a bloody nose that wouldn't quit the other morning and I scared myself to death with it. Just an all around yucky week. I am the type of person who enjoys having something to look forward to. So it was with happy anticipation that I began planning to make the author event something special. I had all of the perfect words to say. The blog I was going to read from was heartfelt and the writing, good.

But there I stood at the head of a room filled with women and I began the comparison game. If I had stayed in the moment, if I'd have spoken from my heart as I had wanted, I think I would have had the confidence I needed. But the minute I tried to turn the page I was reading and my fingers wouldn't work, the old voice of "you are failing; you aren't good enough; you are making mistakes" kept nagging at me. My own voice croaked like a frog, and I stumbled and stuttered over what I wanted to say.

Did anyone notice? I was sure they all did. I felt certain that they were wondering why they ever invited me in the first place. After all, I only sold one book to top it all off.

Tonight I'm going to pick myself up, dust myself off, and know that I did my best. Though fear stood solidly before me, and lies tormented me, I am NOT what fear says I am. I am bold, confident, redeemed, loved, accepted and worthy. I am what God says.

When you find yourself in such a moment; when fear beckons and calls you nasty names, plug your ears, sing a great worship song, and remember "Whose" you are.