As The First Year Approaches 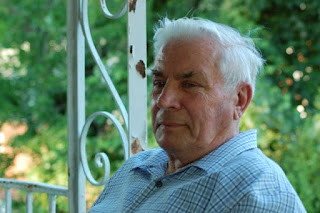 Wow, where has one year gone? For it was this very time last year that began defining what was going to happen very shortly. Who knew when Dad asked me for suspenders because his belt felt too tight and was hurting his stomach that he really had a gall bladder issue? An issue that would ultimately take him from us.

Dad was never one to complain. When asked how he was feeling, he always responded with that wonderful trademark smile, "Fine!" But last July seemed a little different. Dad was slower, crankier, complaining about things. Not the usual sweet, simple man he'd always been.Yes, he still placed Mom's needs first, and never let on how he must have been feeling. But my brother and I suspected something--and Dad, being the rock he'd always been, wouldn't say much about himself.

Last July something wonderful happened also. I had been praying for my parents for a very long time. You see, they'd never been wealthy; never crawled from under small mountains of debt. I asked the Lord if my father could see a great blessing before he died. Would God please show my Dad a miracle? And I'd heard a still, small voice somewhere inside telling me that a great blessing was coming--something that would bring my father great joy.

With anticipation, I dreamed that it would be a large windfall of money. Perhaps one of those silly scratch-off lottery tickets would be the "big one" for them finally. But no such thing happened. What did happen though was something that brought that awesome promise of joy to my dad. I'd contacted a great group of youth from Catholic Heartcamp and about eight wonderful kids and their mentor arrived in July and began to fix things on mom and dad's house that we hadn't been able to attend to. Little by little, windows were freshly painted, gangly bushes were cut, repairs were made and a whole new shower wall was installed. Dad kept remarking on their progress, thrilled with all that took place. I could see a happiness in him--a glow. Things he couldn't do any longer got done. He could take pride in his little old home once again.

Yet I still wondered, still questioned God. Is this it Lord? I thought you promised that Dad would see your glory in a major way.

We cannot question God's gifts, His goodness, mercy and blessings. He chooses what He will. It is not for me to decide that the promise I was given in my heart did not come to pass. On the contrary, our Father may not answer us in the way we'd expected, but we gain so much more by His lessons. Who was I to question the method, the outcome? Dad, in his simple way was delighted.One million dollars couldn't have made him happier.

I will never forget that group of young people and how my father couldn't stop talking about them.

It is almost one year since my father entered the hospital, never to return home. I feel that pit in my stomach once again--the familiar feeling from last year because anniversaries do that to us. They bring the thoughts, feelings and emotions back in a major way. I knew that "firsts" this year would be rough. First Thanksgiving without Dad, first Christmas, etc. But this first year anniversary as it approaches hurts my heart once again. Tears threaten, and there's a lump in my throat that I try hard to choke back.

I miss you so much Dad. I want to make you proud. I'm trying to take care of Mom best I can. Forgive me for anything I may have done that you wouldn't have approved of. Pray for me, Dad. I love you.... 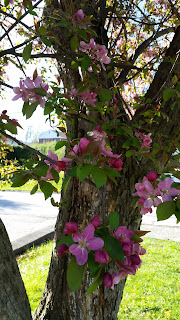 When I opened my side door yesterday morning, the vibrant red cardinal flew to my porch railing. It's as if, on cue, his excellent bird hearing knows precisely what this sound means. Crumbs of bread, succulent seeds are soon to be on their way for he and his little friends. He paused, looking at me in that way that birds do, with head tilted to the side. In close range, I had time to take in the stunning black mask on his face and the tufts of red feathers which poked from his tiny head. Those dark eyes, so filled with intelligence. In the voice usually reserved for my darling cats or very small children, I began speaking to him telling him what a pretty bird he was and how happy I am that he greets me each morning. I talked and talked, making clucking sounds or tsking noises, anything to hold his interest so that we could communicate he and I in any way possible.

My cats took this as a sign that I was calling to them when they heard my loving sounds, and proceeded to investigate why their mother was speaking in that special way to another.

The cardinal flew to another part of the porch, this time lighting on one of the chairs. I still spoke, and he listened, all the while the little head tilted as if trying to discern what I said. He flew up from the chair, actually hovering in the air for a moment or two, bright wings flapping as if dancing for me. To the top of my grill, then onto the wicker porch swing, Mr. bird paused, never leaving, appearing to take in the language as foreign to him as his chirping is to me.

Next, he landed on my car, and I reveled in the special moments meant only for me, not worrying that I didn't have camera or phone to record this special time, but recording it to the memory of my heart.

For I believe we have a blossoming friendship, the cardinal and I. It's been at least a year that he and the missus have lived in our backyard pine. Never straying very far, he knows my movements, when my car returns from a work day, and he is there to greet and to sing, giving me gifts that only he can.

Nature has always been such a big part of my family. My mother grew close to a female raccoon to the point she was able to hand feed her. When the raccoon had babies, she brought them to my mom as if waiting for approval, and teaching them that this human was kind; this human will not hurt you.

My parents enjoyed watching the birds around their home, and eventually hanging a hummingbird feeder for the last several years. As Dad would sit on the porch, those little darlings would hover near to his face, investigating him before whisking away in that speedy fashion they have of flying to seek more nectar.

I walked outside yesterday, and grabbed the bag of seeds to fill the bird feeder. The cardinal flew to the lowest branches of a nearby tree, waiting patiently. Though I filled my hand with seeds and called to him, inviting him to a more intimate feeding, he would not come; would not breach the gap between human and animal.

Perhaps someday, I thought. For there is a friendship growing between the two of us. A precious trust that reminds me of our Heavenly Father. God invites me to those more intimate times. Will I dare to give up control, trusting Him for friendship, for more beauty than I ever dreamed possible?

May we all appreciate nature and every good gift that comes from above.