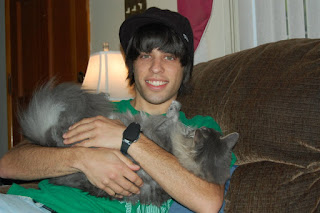 Twenty-five years old.  An amazing young man.  A little timid when he was younger, my son Matt now has a YouTube following with his Journey to the Claw machine series.  Obsessed when he was a small boy playing crane/claw machines, he actually purchased his own in his early twenties.  He taught himself the ins and outs of the workings of the machine, and eventually the tricks of the trade enabling young and old alike to have more "wins" at the game in video arcades.
He has fun with this, making crazy videos, sharing his enthusiasm, whooping it up for his fans.  But recently he took on a more serious role.  Matt has begun to donate his claw machine wins to some charities that specialize for children in dire situations such as Hurricane Sandy victims and the recent school shooting in Connecticut.  He also met a fan of his who has Asperger's syndrome recently and the two played machines together as if they had known one another their whole lives.
It makes my heart happy to see how far my son has come in such a short time.  I always knew God had great things in store for him, and now I see the promise being fulfilled.
Posted by Karen L. Malena at 5:37 AM 2 comments:

A Day of Changed Lives

September 11, 2001.  A day that would change history in our country.  As a younger, single mother, I couldn't watch as the events unfolded on the television that night.  I couldn't bear to think about what was going on around me and my young son.  Would we be safe?  Would more devastation happen perhaps even closer to home this time?
I had been working at a dentist office at the time when the news first hit the airwaves.  I looked up from the patient seated before the dentist and I, eyes wide behind the safety glasses I wore.  Hmmm, just an accident, I thought at first.  Then the report came in of a second incident and later more tragic news.  I wanted to bolt from the office, pick my child up from school and hunker down somewhere safe.  The dentist would not permit me to go.  He told me it was business as usual and nothing further would happen.
As I walked through the door to my parents home after work that evening, seeing the faces of my loved ones before me, I gave silent thanks to God.  How many others would be crying out to Him that night?  How many others were in the midst of grief and despair?
I shut down after that.  I would not view television reports, look at newspaper or magazine articles.  It was as if I wanted to live in my own little world.  A world where things like this did not happen.
It would take me many years to finally watch the events of that fateful day.  My new husband saved newspaper articles, and little by little, I became curious.  We would sit and view poignant programs about the many events of September 11th.
The day my husband took me to the plane crash site in Somerset, Pennsylvania would change my life.  As we stood on the hillside, the wind whipping about us, I could feel the solemness, the almost spiritual quality in the very air.  I began to appreciate the heroes and the many people who had died that day in a way I never had before.  The small chapel where many had left condolences and tokens of love was an all too vivid reminder of the lives snuffed so briefly out. 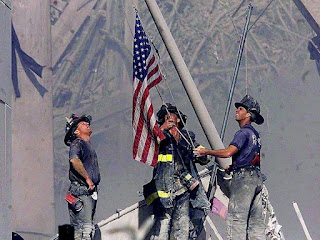 Each year my husband and I make the hour or so trip to this hallowed site.  There have been several changes through the years, improvements as it were.  But the initial feeling of the sacredness, the feeling you perhaps get when you first stand on the Gettysburg battlefield remains.
Posted by Karen L. Malena at 10:03 AM No comments: