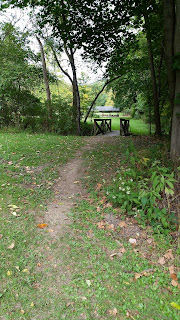 The other day, I'd heard a droning sound from the tree in my front yard. On and on it rasped, the chirr of a cicada or whatever late summer insect leered down from its perch up in the branches above. All of a sudden, a memory hit, so powerful in its wake as it brought back sounds, scents, tastes and emotions from a time in my youth.

Late summer had always been a magical time for me as a child. My Italian grandparents didn't have only one vegetable garden in their own back yard, but they rented plots of land in back of other people's houses as well. I would accompany them for tomato picking, and the fresh green tang of the vine as it rubbed against my fingers left an indelible mark on my senses. Curly lettuce, huge Roman beans, green peppers . . .  I could imagine Nonna, later in the day, a bandana wound round her head, and an apron stained with the juices of fresh veggies splashed all over the front. I would await the crispy, dried braided garlic and onions which hung from the rafters in her cool cellar. A gathering of Mason jars, freshly boiled and ready for homemade tomato sauces, pickled peppers, mushrooms and more. Her walk-in attic always held trays of parsley and basil, drying in the dark upon the beds up there. The aroma would have put a pizza shop to shame.

It always amazed me that my grandparents were able to discern a good mushroom from a poisonous one. But that is what they hunted in deep woods as we spent long hours in Economy Park and other highly wooded areas while my parents chose to pick blackberries.

We would dress in long-sleeved clothing and long pants, though the summer days were stifling and humid. It never seemed to bother me then. Mom would say, "You don't want mosquito bites all over you." Or, "Those blackberry bushes have thorns. You have to wear long clothes." So we never questioned the importance of our garb, and off we drove in a car without air-conditioning, the windows wide open and the scents of summer flying by.

It would be early in the day as Dad parked the car. The long, dry, un-cut grass near the trails we blazed into the woods tried to tickle my clothing as I waded into it. The cicadas sang their unceasing song above in the trees, rasping out sounds only they could understand. Each of us carried a plastic pail just waiting to catch all the treasures of the woods within. Not a breath of air stirred, but the birds called out warnings to one another that their perfect world would soon be invaded.

Dad always gave me a long stick as we began our trek into the woods. "For snakes," he would say, though thankfully I never saw one. Nonna and Nonno would go off on their own for mushrooms, while me and my parents found hoards of delectable blackberries, bursting ripe and juicy. Though a few made it into my mouth during picking, most plunked into the buckets with the promise of hot pies and jellies. The slightly tart, sweet taste will always bring back my youth. These were the best times. For they were time well spent with loving family, talking and joking with one another and working side by side, though it never felt like work at the time.

When we came out of the woods hours later, Dad would always challenge Mom to a game of "hit the apple on the center of the tree." There were several wild green crab apple trees, and the rotting fruit lay at their bases, all worm holed and oozing. My parents would count how many times each of them would hit the tree with the small projectile, and it became a contest every time. I never chose sides, but cheered each of them on, enjoying their silly taunting of one another and name calling.

After a small snack of crackers, cheese and Lemon Blend from a thermos, we would pack up Dad's trunk with pails and bushels, bringing home a few of nature's tiniest bug critters with us as they clung for dear life onto the stems of our prizes. I would look up into the trees trying to locate the singing cicadas, but never quite able to view one. I waved goodbye to another year, another trek into deep woods, feeling perfectly safe, innocent and very much alive.

I'm Not the Same 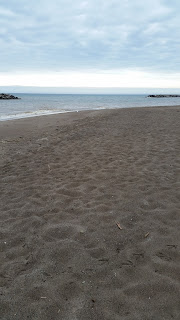 My goodness. Is it really one year almost to the day that Dad went into the hospital for a three week stay never to return home again? Has time passed that quickly as it has that sneaky way of doing?

When I think about all that has gone on in one year's time, I realize an important truth: I am not the same person I was then. I think I view every day occurrences in a much different light. Stuff that bothered me so badly either at work or during a normal home day, has lost its steely grip on me. I don't think it's important enough to harbor grudges long, or at all. I don't waste time obsessing over triviality. When you've lost loved ones, life is put into a new perspective and it's up to us to learn the important lesson.

Lesson one: I'm beginning to de-clutter my closets and find that is making me a calmer person. If I've not used it, looked at it, worn it, or cared about it in several years, I'm not about to begin to either. So another person may benefit from it, or if it's ratty enough, into the trash it goes. Oh, the feeling of purging junk, and I'm not just talking about closet stuff now. We all carry garbage inside of us. Voices from the past that accuse and belittle. What if like the closet, we choose to rid ourselves of things we no longer need, and probably never did. That hateful comment from a relative, or a snide remark from a co-worker. Or what if what we heard wasn't really intended for us all along, yet we wore the remark like a heavy, old coat that needed retired years ago.

Lesson two: People are more important than things or chores. We all have daily schedules that we need to keep. But sometimes we push ourselves on one of our off days because heaven forbid, the grass wasn't cut, or there is a layer of dust on our end table. If given the opportunity to tidy up, or play with my nieces, I'm choosing the girls every time. There is always another day for labor, but sometimes a priceless moment can be lost forever. I've found the inner child when I'm at a playground with my nieces. I've been Belle from Beauty and the Beast, and countless other make-believe people as I enter their world. I wouldn't trade that for anything.

And what is it with technology? Put the phone down. Take a moment to look at the person sitting in front of you, or beside you. Talk in the car when going on trips. Giggle in restaurants together and make conversation. That phone, I-pad, Tablet or game will always be there. Don't miss the time with a real person having real talk. Learn from them, and listen.

Lesson three: Love really is the answer. Why oh why did I hold onto anger? When I've given grace to another, and let go of longstanding drama, I find that I understand the heart of God. For isn't this what He does for us each and every day? If God chooses to love us unconditionally, then why do I place conditions on every relationship I have? I don't need to think about what my husband said two years ago during a ridiculous battle. I can let go of bitterness toward situations I have no control of, and really love with all my heart. I can forgive, forget, move on and love.

Lesson four: Faith is important. Though I've spent years in church, have read my Bible, consider myself a Christian, did I really understand what true faith was? Have I been able to let go and let God handle my life and the lives of loved ones? When dealing with illness and death, I had to relinquish total control to the Lord. In the quiet of my soul when I cried out to Him, the answer that came back was to have faith. But what if what we pray for, and have faith that moves mountains doesn't come to pass? What if we lose the loved one(s) and we are devastated beyond belief? Does that make God any less real? No. For I've felt more than ever, His Holy Spirit deep within me. I've touched the peace that passes understanding and came away calm and whole. Though I had no control when losing my parents over this last year, God's plan is not my plan. But He deepened my faith, showed me that He never left me, and gave me an outlook on life that couldn't be learned any other way.

It's true. Grief and difficult situations can build character. They don't have to sweep over us and leave us crippled with doubt and fear. They help us to see what is really important. When we look for the small moments of goodness through the pain, when we see those who touched our lives and showed us that we didn't have to walk the journey alone, we then can know we are not the same people we once were. We have been refined like precious gold, no longer tarnished by the chains that bound us.