Not just another "animal" story 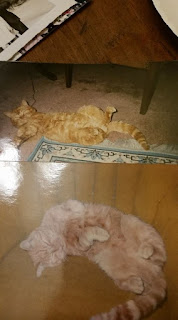 We've all heard dramatic tales of owners and their beloved pets of many years becoming separated when a move is taking place, the pet becomes lost  somehow, or runs away. I've always found these tales to be almost unbelievable. How can a dog travel hundreds of miles, following some sort-of scent, only to be reunited with his cherished owner weeks later?

The power of "belonging" and how even an animal may feel this way, was taught to me in a big way many years ago.

We've always owned cats, even a dog, but sometimes the occasional "stray" would find its way into our yard. My mom, being the kind-hearted pet lover she was, would make certain food and water was left out daily causing the stray to return time and again. One such year, a scruffy-looking orange male tabby cat, stole his way into our hearts. He appeared to be the type of cat that nobody wanted: a bit worse for wear, an old "Tom" type cat. That time, Mom went a bit farther than before. She let him into our house, worrying over the weather conditions. She made a small bed for him out of some old blankets and put them in a corner of the kitchen where he slept many blissful hours away.

A time came when he wasn't looking so well. Mom could tell he was very sick. My brother and I, also being animal lovers decided to take him to the local vet. Maybe there was something the doctor could do to make him a bit more comfortable perhaps. We had no cat carrier, and the old boy was moving so slowly, we bundled him into some blankets and off we went.

We pulled into the parking lot of the animal clinic, and I opened the door with Mr. Kitty in my arms. Now you have to remember, this is a cat that barely moved except to eat a little from his food dish and then returned quickly to his bedding. The cat bolted from my arms, ran across a road and disappeared into a heavily wooded area. My brother and I frantically drove around for the longest time, calling for a cat that had no name. We never found him.

I felt a sort-of relief in some ways. He was out of our concern now, and hopefully would live out his remaining days in peace somewhere.

Weeks went by, and life settled into a routine. My parents returned from a trip to the grocery store one day when Dad made a startling discovery. "Look who's back, hon," he said and pointed. There, at the end of the driveway sat old, orange Tom cat, the cat who had no name. A cat who really wasn't "ours". He'd made his way over several miles and at least two or more weeks to come back to what he felt was "home." Perhaps nobody in his little kitty life had ever treated him with such respect and kindness. A short time later, he ran away, never to be seen again. I'd like to think he came to say goodbye to a family who loved him just for a little bit.