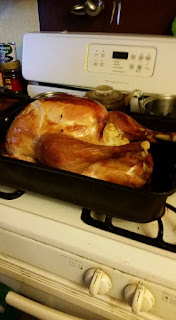 As Thanksgiving approached this year, I found myself angry and upset. Because of Mom's dementia and confusion about so many things, I'd wanted to take the full responsibilities of the dinner upon myself. I wanted her to relax, sit back and let someone else do all the cooking, all the preparation, all of it. No such thing happened.

About a month ago, Mom announced that she wanted to buy the turkey. I begged and pleaded, telling her it was way too early, first of all. I told her that they've come to my house for the last five years, and wouldn't she like to do that again? Wouldn't she like to just enjoy the meal and get out of her house for a change? Nope. Mom would get upset every time the turkey battle would ensue. She'd huff and puff on the phone when we spoke, acting what I thought was rather childish. Little temper tantrums about how she wanted to do this, and a day or so without speaking to me after she got upset over mashed potatoes.

I cried myself to sleep a few nights about this change of power. I felt wronged and I grieved over the injustice done to me. Then it hit me. This is not about me. This is about her illness. An illness of the mind. She doesn't have control over much these days, not her thoughts or actions at times. Perhaps this Thanksgiving meal is the last hurrah of sorts. Her one way to gain control over a situation that is important to her. For cooking and baking have always been Mom's strengths. We had meals through the years, and not only the Italian ones, meals that were homey and good. Baked goods and homemade pizza that rivaled most of the best pizza parlors in town. This is where Mom felt safe. Her kitchen. A place where she always had control. And here I was trying the power struggle to take it away from her.

When I let my pride go and got into the spirit of things, I immediately felt a release of all the pent up emotions of the last few weeks. If it was this important to her, then I'd make it my priority for it to be important to me. Mom started days before Thanksgiving with a chocolate cake. Then another dessert she always makes called refrigerator cake. (Recipe to follow.) She threw together a batch of unbaked cookies. She made potato salad even though I told her we wanted mashed potatoes. There was no stopping the whirlwind frenzy that was my mother in the days leading up to the Thanksgiving.

I fretted over the bird most of all. I wondered if she remembered how to make one. Was her stuffing going to turn out? Would that turkey be fully cooked? Were we all headed to the emergency room afterward?

My brother and father helped Mom best they could until I arrived early Thanksgiving morning. And I was surprised that the turkey sat in the oven, already stuffed, already baking. As the hours ticked by, and each additional preparation began, the heavenly aroma lay about the house as the bird continued to roast.

I found a meat thermometer which pleased me to no end a little later. And when I inserted it into the breast, I saw it jump to the proper reading. It was finished! Wow, and it looked great! The picture above is indeed of the main event. On the old stove sat the pride of my mother. She'd remembered and done well I might add. Yes, she talked about the same things over and over yesterday. She checked and double checked things many times. But each of us handled it with good grace and a sense of humor. We enjoyed the day, so thankful for the blessing of our family. So grateful to still have Mom and Dad with us and the closeness of the loud Italian family I speak of so often.

No, it wasn't like Thanksgiving's of the past. It was different, yet somehow better. Years and memories have come and gone. Good times and bad, happiness and sadness. One thing remains: the love.

Layer graham crackers in a 13x9 pan across the bottom, breaking them to fit. Do not crush them, lay them flat.

Cook vanilla and chocolate puddings according to package directions.

Begin with a thin layer of chocolate pudding across the graham crackers, spreading it evenly. Then layer graham crackers across the top. (Remember do not crush them, lay them whole.) Alternate with vanilla pudding, etc until you end up with pudding on the top. Now you can slice bananas onto the dessert if you wish, then refrigerate. No baking involved.
Posted by Karen L. Malena at 3:26 AM 9 comments: 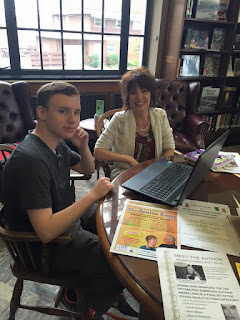 When I was fifteen I wrote what I thought was an extremely good short story. I'd certainly read enough books to understand the dynamics of writing, or so I'd thought. I listened to lyrics of songs, picturing grand novels from them, and obsessed over the movies I loved. How difficult could this be?

I handed the story that was about two best friends to my mother. It was a tragic tale, since one of them dies. I sat nearby waiting for the reaction I was sure would come from my mom. She'd clutch the pages to her chest, tears rolling down her face. She'd tell me it was Pulitzer Prize worthy, and she'd take me out of high school so I could begin my journey as a best-selling author.

Nothing of the sort happened. You see, Mom did something totally unexpected. She broke into gales of laughter instead. First, a slight chuckle emanated from her. Then total guffaws racked her body. My young fragile psyche was ruined. Laughing! You should be crying, Mother dear. I grabbed the story from her, ripping it into the smallest pieces I possibly could, and promptly threw the offensive story into the trashcan.

Nowadays, we parents try a little too hard to be our child's best friend. We praise them for every little deed they do, acting as if they'll win the prize for best daughter or son if they simply wake up in the morning. Now I realize what happened to me as a teenager might be a bit extreme. I'm not damaged or anything from my mother's reaction to the story I'd written. I mean, yeah, years of therapy and hundreds of dollars later, I'm okay, at least I think so. . .

Seriously though, it's good to have a little dissension. It's good for kids to have to work hard at what they do. They shouldn't automatically receive an A+ for a job that isn't their best. It's too easy to praise without the effort put forth into most things our children do. We shouldn't protect them from every scrape or bruise either. Because one day, they'll walk out into the world, and someone or something will hurt them and they will crumble right on the spot. But if we, as parents let them try something, fail perhaps at it, pick themselves up and do it again, but better this time, our child will have learned a valuable lesson.

I have gone from being laughed at to becoming a published author. And it wasn't overnight and it certainly wasn't easy. There were bumps and bruises along the way. Rejections and negativity. But there also is joy. Joy in encouraging someone with a piece I've written. A book that resounded with them, and a person shares with me their own tales because a character of mine touched a sensitive nerve or reminded them of someone they encountered.

Recently I've begun to mentor young writers. You can ask them if I'm fair. I think they'll tell you that I am. I give praise where it's due, and critique when necessary. But you can see the look on their face when they realize that they've pushed themselves out of their comfort zones. The moment when what I'm teaching them clicks into realization about a sentence or paragraph. When I ask, "would your character really do or say that?" They may even tell you that one day, they, too will become a published author. Chances are, they probably will.