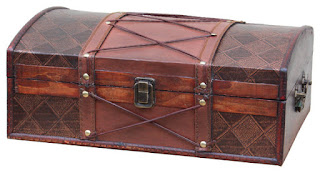 It sits in the back of my clothes cupboard. Years worth of cards, letters, pictures and memorabilia all are stuffed inside. I'd wanted to do a little organizing, so I pulled out the old memory box. I must have tried rearranging it once before, for I found birthday cards bundled together, each from a specific person: my husband, son, brother and parents. Other assorted items lay in the bottom: a broken piece of a hockey stick signed by a favorite player from when I was younger. A plastic heart necklace from some kids I taught Sunday school to back in the early eighties. Items from my Nonna who had passed away long ago. It had been a long time since I'd viewed the contents of this box. What other treasures would I find?

I began opening the cards. There were humorous ones from my brother. We'd always had the type of relationship where we ribbed one another mercilessly. He would comment on birthday cards of how old I was getting--since I'm fourteen years his senior--and would include little drawings and sayings that had meant something to us through the years.

I opened cards from old friends, people I hadn't seen in a while. I found thank you's and good wishes from people when I left a job I'd worked at for twenty-seven years. Some of the patients wishing me well in my new life, and a letter of recommendation from my old boss that warmed my heart.

When I found my son's cards, I paused and read each of them carefully. A mother treasures such things especially when you aren't always vocal about your feelings. The writing inside the cards spoke volumes to me about the way he felt. So much appreciation for me as a mom. And love that he isn't able to express so easily.

The last batch of cards were from my parents. There were ones all the way back to the late seventies. There were humorous drawings from them, silly stick figures and animals that had made me laugh through the years. There were sayings from our favorite movies, and even some poetic prose from my mother. When I found a few letters my mother had written and carefully tucked into the birthday cards, I took the time to read them word for word. With her worsening dementia, it has become more important than ever to remember who she once was, and how caring and intelligent she'd been.

There were words from Mom that told of her happiness of our closeness. That we were more than mother and daughter, but best friends too. There were words that told of her feelings of love and how proud she'd been of me, though I'd always felt I messed up so terribly in my life. She called me her shining star, and said that if it wasn't for me, she didn't think she would have made it through some of the difficult times. I felt overwrought with emotion, and the words blurred on the pages of the letters as tears welled up in my eyes and spilled over onto my cheeks. My husband asked why I was crying, and I couldn't bring to words what it meant to me finding these precious gifts tucked away in an old box.

I still need to weed through and do a bit more organizing. But today I'll do it with a lighter heart. For now I know just how much I've been loved and appreciated. 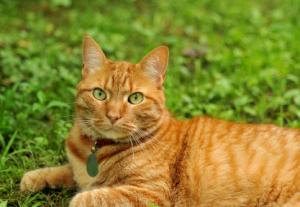 He was orange and scruffy. He seemed ageless. He was bold, unafraid and in your face. He was friends with every child at the grade school down the road. His name was Tiger, and he was the neighborhood cat.

Just yesterday, my father asked me about that cat. My father is eighty-five, and I found myself amazed that the memory of Tiger popped into his head. "Kar," he asked. "Do you remember the cat that was friends with every kid at the school years back?"

I hadn't thought of Tiger in a while. But he is one cat I won't ever forget, especially since it meant so much to Dad to talk about him. It warmed me that thinking that the silly cat made my father smile and he couldn't stop talking about it for days.

Tiger would stand at the bus stop across the street waiting with a group of children for their morning ride to school. At the end of their day, he would trudge patiently and carefully across the street, once again, as if to welcome them home. There were times he would follow one particular child for a while, as if he knew that they needed a little extra care or friendship that day perhaps.

And Tiger would walk to the grade school near his own house, spending time just like one of the gang with groups of children, rubbing in and out of their ankles, looking up quizzically into their faces as if trying to understand what they were talking about.

The cutest story about this cat however happened when I sat watching a school concert one evening with friends. My son, Matt, was in a little chorus routine, and all of the moms jostled for position in the auditorium. It was a stuffy evening from what I remember, so the doors to the outside were propped wide open.

The lights dimmed, the children began to assemble in their places on the stage before us, when big as life, Tiger walked out onto the stage with them. Audience members couldn't believe it. That silly cat had gone too far. Boldly, brazenly walking not only into the auditorium, but also believing he had every right to be there with what he'd come to know as his friends.

Many people pulled out their video recorders and began filming, others erupted in laughter. One teacher went to shoo the cat from the stage, but of course the damage had already been done, and Tiger had completely stolen the show.

I never really found out what happened to that cat, as my own life got in the way. Rumor had it, that someone actually stole him from the neighborhood because they wanted to give him what they thought was a better home.

Whatever happened, I know that our lives are a little better for having known this special kitty. I learned some lessons from him. Be bold. Be friendly. Be caring. Be all "in your face" when you want something. Make new friends, keep the old. And rub a ton of ankles. Whatever will warm another person, that's what Tiger did. And that's something I'd like to do in this world. Touch lives and warm people with stories such as this one. There's so much seriousness. I want to be remembered like Tiger.
Posted by Karen L. Malena at 5:11 PM 5 comments: 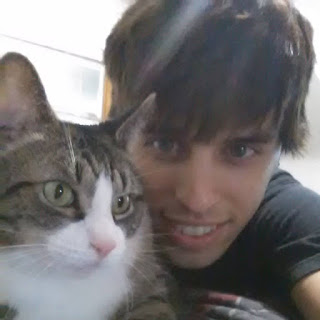 A mother's love doesn't dwindle over time. On the contrary, I believe it gets stronger. When our kids were little, they needed us for most everything. And as they grew, they needed us less and less. So if on my son's birthday I want to make a little fuss all over him, I'm gonna do it. I don't get much of a chance for this sort of behavior any longer.

Did I embarrass him today? Hope so. For isn't that what birthdays are all about? A time for fussing loudly, feeling special and making a little noise?

May you find a relationship with God at some point in your life, knowing He's the true author of all the events. May you feel a comfort, a peace in speaking with Him, knowing you can trust your heart to the author and perfecter of all things.

May you live a long and healthy life, enjoying your work, play and relationships. And may you know just how much this crazy mother loves you!