A Love to Last a Lifetime

Nothing has touched me recently more than watching my husband's elderly aunt and uncle in the care facility which they call home these days.  They did not share a room, but got together every day through the kindness of nurses and aides in the dining area or hallway in their wheelchairs.

Aunt Louise had a stroke over four years ago and was placed into the care facility soon after.  Unable to speak more than just a few garbled phrases, and paralyzed on one side of her body, the once active Italian lady began to go downhill.

In her day, I am told, Louise was quite the character.  When I first met her seven years ago, I was completely unprepared for the little, Italian lady who greeted me when my husband first brought me out to the town he lived in.

A tiny, thin woman dressed in gaudy clothing, sparkles adorning her sweater, tight-fitted pants and spiky heels which I had never been able to wear in my youth, got out of a car and approached me.  Bangles glittered on her arms, earrings as long as chandeliers adorned her lobes.

Even though this wasn't the type of little, old Italian aunt I was used to, Louise and I instantly bonded.  Over the next few years, she and her husband, Hubert became more like in-laws to me, as I had never met my husband's parents since they had passed away years ago.

The night before she had the stroke, Louise was out dancing the night away.   Her husband, Hubert had found her the next morning slumped over the table where she had been putting on her make-up for the day ahead.

For the next several years I would bond even more with these two people as Uncle Hubert's own health began to deteriorate.  He visited her daily while he was capable, driving himself to the nursing home.  Then when driving proved too much for him, he would ride a small, local bus to see his sweetheart.  Then as walking became the biggest issue, I would pick him up to visit his darling for a few hours.

Over the last two years, his own health worsened, and Uncle Hubert was admitted to the same facility which housed his wife of almost fifty years.

The care and concern even with his own health failing, never ceased to amaze me.  The love and tenderness with which he spoke to his frail wife, looking upon her like a young lover.  When he would take his leave of her for the day, he would glide his wheelchair as close to hers as possible, to kiss her tenderly.

They celebrated their fifty year anniversary in the nursing home surrounded by loved ones.  Last week, we said our goodbyes to Louise, as she passed from this life into the next.  As Hubert was wheeled into the funeral home to see his wife for the final time, the nurse helped him to his feet to give his beloved one more kiss before he will join her someday, in the eternal hereafter. 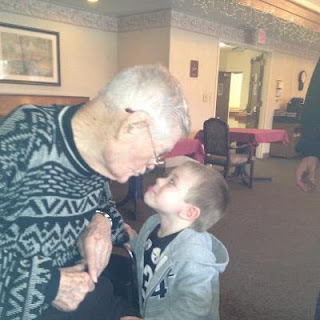